coatings of LRB and PermaFlex from 20-30 mils as well as solid castings of LRB, were attached to a pier column near Los Angeles, California. The test sample was prepared with both coated and uncoated areas to create and allow a "raw edge" of the coatings and LRB castings to examine the products abilities to resist delamination or detachment caused by constant immersion to sea water where the coatings were terminated upon the test sample substrates of wood, concrete, and steel plate.

This test installation has been subjected to continuous immersion. The test sample was intended to test the suitability for these products as waterproofing system with-in harsh salt water applications and to determine their over-all abilities to withstand constant immersion without physical breakdown or deterioration. The results of routine examinations after 3 years are as follows. 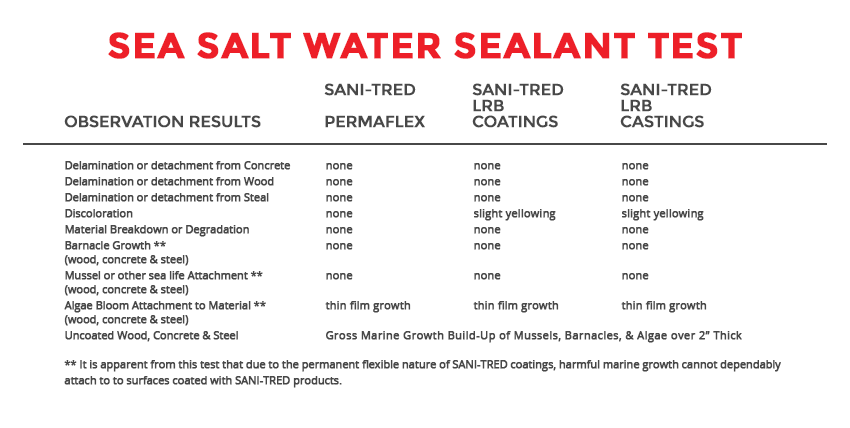 Four pieces of badly rusted, flaking, scrap, structural steel checker plate and channel were coated with 15 mil films of SANI-TRED PermaFlex marine water-resistant sealant paint at 40° F., and 70° F. Only half of the individual pieces were coated with this waterproof sealant paint, and the other half of the pieces were left uncoated and in their original rusty condition. These rusty test pieces had no oils or grease of any kind on them there-fore no preparation was given to the rusty test pieces in advance and PermaFlex was applied directly upon gross flaking rust deposits and scales.

New pieces of identical steel were degreased with solvent and free from rust and oxidation. The new pieces of degreased steel were also coated with SANI-TRED PermaFlex at 40° F and 70° F in exactly the same way as the rusty pieces. All pieces were allowed to cure over night @ 25° F. Next morning, a solution of 4 pounds of rock salt was added to one gallon of water to produce a completely saturated salt brine solution.

After 12 months the partially coated steel parts were removed from the brine, rinsed with fresh water and examined. 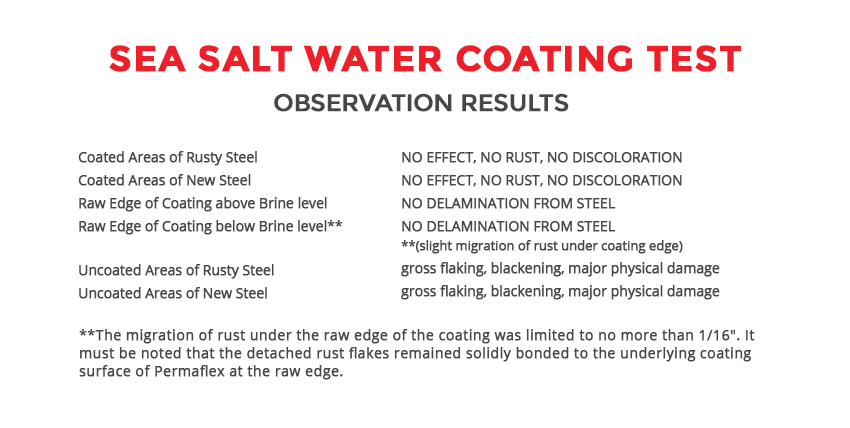